Bring the milk to a boil in a large pan, then add the sugar and mix thoroughly. Sprinkle in the couscous slowly while stirring the mixture. Cook for 5 minutes over a low flame stirring constantly. Do not overcook the couscous. Remove from the stove and let it cool somewhat. Add the butter, raisins, vanilla, nutmeg and cinnamon and mix thoroughly. Then separate the yolks from the whites and put the whites aside. Add the egg yolks to the mixture one at a time and mix them in.

Beat the egg whites until they are fairly stiff and then fold them gently into the mixture. Pour into a soufflé mould in which you have prepared a caramel mixture (see below) and sprinkle lightly with nutmeg. Bake in a moderate oven (setting 6) for 30 minutes.

To make the caramel in the mould, simply place 50 g of sugar in the mould and heat over a high flame until the sugar starts to melt and turn into caramel. Once all the sugar has melted, you can turn and tip the mould (wearing heavy hot pad gloves, of course) so that the caramel mixture covers the bottom and as high up on the sides of the mould as possible.

Can be served warm or cold.

Variations: instead of raisins, you can add a different fruit, such as pineapple, oranges or dried apricots. You can also lightly flavour the dish with rhum or a good cognac. 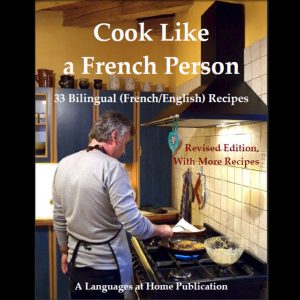 33 bilingual traditional and easy French recipes adapted to an international taste with very useful vocabulary and expressions.
To make your life easier, all the recipes are bilingual, but we encourage students of French to read and use the French version also, and to take the opportunity to learn very useful vocabulary and expressions that are invaluable for those who travel or live in a French-speaking country. Bon appétit!
Cook Like a French Person – eBook
On Sale: Only $10.99/9.99€!