La Rochelle: A Charming French Port that Seduces the English

When you walk around La Rochelle on the weekend and during the holidays, you are surprised to hear English spoken everywhere, along the port, in the terraces of the restaurants, in the centre of the old town, at the market. Among the 3 million visitors each year, which makes this city the third most visited after Paris, Anglo-Saxons are the most numerous. Why do they love it so much? Maybe because La Rochelle once belonged to the British Kingdom? Or rather, and above all, because it is one of the prettiest ancient ports in France, a pioneer in environmental protection, and because it is easily accessible from the UK. For those who are not yet familiar with it, the following articles offer a little reminder of the main attractions of this city with its authentic French charm, which appeals so much to the English.

From Fiction to Historical Reality

The port of La Rochelle was ‘the last door open to the English in the kingdom of France’ as we read in Alexandre Dumas’ famous novel ‘The Three Musketeers’. This excerpt from the work of fiction relates a real event: the siege of La Rochelle in 1627-1628, by the Catholic King’s army Louis III, led by Cardinal de Richelieu, against this Protestant city, which was then the largest port on the Atlantic coast. Their objective was to drive out the English – an irony of history when we know how attached they are to it today.  La Rochelle, born in the year 1000 belonged to the Kingdom of England in the 1200s and 1300s, and the English still continued to exercise a strong influence  four centuries later.
Although the siege almost completely destroyed the medieval city, there are still magnificent remains of the ramparts, including the Big Clock Gate and the defensive towers that surround the entire old port. One of its former mayors rightly described it as “beautiful and rebellious”.

A City to Discover on Foot, or by Bike

La Rochelle is a  beautiful, environmentally friendly city by the sea with a relaxed and warm atmosphere, where we feel a joie de vivre.  One of the pleasures for visitors is to stroll through the small pedestrian and arcaded streets in the city centre where they can admire the beautiful architecture from the 17th and 18th centuries.  Note that La Rochelle was the first town in France to create a pedestrian area in the town centre, in 1975. In addition to spending time window shopping at the numerous boutiques, the visitors all end up at the main marché ‘Les Halles’ where the choice of fish and seafood, which are always extremely fresh, is truly remarkable.  There are excellent oysters all year round and, when it is in season (from October to April), scallops, which are perhaps the best in the world!
In the evenings, tourists, locals and students alike meet at the old port, which became entirely pedestrian in July 2015. There are many cafés and restaurants  to have a drink or dinner while watching the sunset over the port.

There are several museums worth visiting. The Maritime Museum, for example, which is spread out over several ships and has been spilling over onto land since this spring with an exhibition devoted to the History of La Rochelle through its port, is very popular with visitors. The Museum of the New World and the Museum of Fine Arts are also interesting.  As well as the Natural History Museum located in a renovated old building, where 10,000 objects are displayed in showcases playing with colours and lights. And another must-see site is the Aquarium, one of the most beautiful in France, which is home to 12,000 species of marine animals.

Finally, another attraction of La Rochelle is the large number of beautiful beaches that surround it, and beautiful islands, such as the Ile de Ré… u planning a trip to France? This e-book (or paper book) with audio will provide you with the essential communication tools so that you can enjoy a more satisfying experience during your stay.

Ile de Ré: The Island for Children and Cyclists urrounding La Rochelle, of which the closest and most easily accessible is the Ile de Ré. Indeed, thanks to a large 2.9 km bridge that connects it to the coast, it can be reached by car or bicycle, and not only by boat. There is a charge for crossing the bridge by car, motorbike or scooter but it is free for cyclist. In fact, it is often said that the most pleasant and easy way to visit the Ile de Ré is by bicycle.
The island is 30 km long and up to 5 km wide and is surrounded by beautiful sandy beaches. It is called “Children’s Island” because of the leisure activities available to them, its tranquility and safety.
As with La Rochelle, the island’s success with tourists from all over Europe is due to the charm of each  village, with its small houses, its peaceful atmosphere, and the markets offering a very appetizing choice of fish, oysters and other seafood, as well as locally grown fruit and vegetables. Among the specialties found on the island is “white gold”: sea salt, collected in the numerous salt marshes on the island.  And also, some wine is produced in the south of the island, including a very good “rosé des Dunes”… 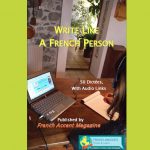